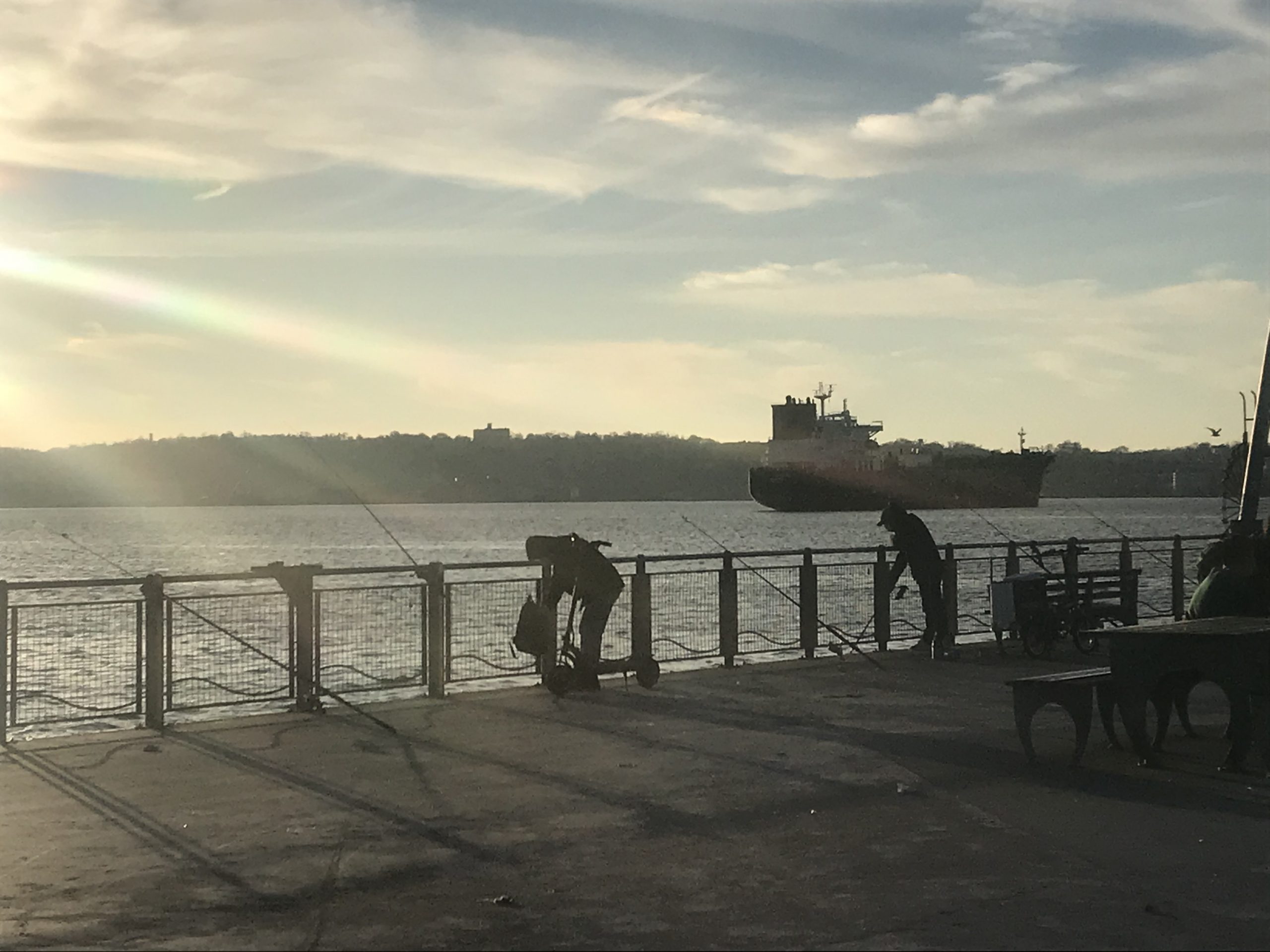 I believe that places are what we make them.

Fatima Jimenez sits outside the Bay Ridge Barber Shop on 3rd Ave. She used to live in Bay Ridge. While she now lives in the Bronx she comes to Bay Ridge often because her mother lives here. Speaking in Spanish, Fatima explains that she likes the neighborhood vibe and the fact that everything is close by – laundry, the trains, the bus.

She would like there to be fewer polluting industries, saying that the air is bad for the elderly and for children. “These businesses should be in places where there are fewer people.”

“I would like there to be less violence, and fewer health problems,” she adds. “I believe that places are what we make them.”

On the opposite side of the street a man sits on the corner in his walker – he prefers not to share his name.

“I’m 82 years old and I’ve been living in the neighborhood three quarters of my life,” he says.

“Now it’s completely like a different country. There are so many different languages being spoken. It seems to me like a lot of people don’t want to be American. The way of life that I grew up with, it’s all gone. People showed a little more respect. Now, I have a walker, some people don’t get out of my way. They want me to get out of their way.”

Further down 3rd Ave, Steve is on his way home from the gym.

These small businesses are really suffering because of the pandemic. You see a lot of people working here, mostly immigrants, I mean their dreams are going up in smoke.

“That would be Saint Anslem’s Church, because I go there, it’s my parish as a practicing Catholic. It’s on 4th Avenue and 83rd Street.

“I’ve only been here in Bay Ridge for about three years. I can’t talk like some of the old-timers would about how things were. It’s a working class neighborhood, and the people are mellow.

“I came from Springfield Gardens [in Queens] where everything was laid out, it was mostly single family houses. You had much more open space and stuff. You had much less density, so it was very different. But the people here are nice.”

What I would like to see five years from now

“Well I’m not an urban planner so I really can’t make a decision. But I think these small businesses are really suffering because of the pandemic. You see a lot of people working here, mostly immigrants, I mean their dreams are going up in smoke. It’s the hopes and dreams of people who come here to get ahead.”

The Partnership for New York City has estimated that a third of the city’s 230,000 small businesses may not re-open post-COVID. New York Magazine has dedicated its December issue to the businesses that have been lost so far.

Xavier is sitting on a bench with a friend on American Veterans Memorial Pier in Bay Ridge, as the sun goes down.

“It would be this pier, because it’s very calming. I come here every time I feel stressed out, just to relax.

It’s become even more important during COVID, just to keep your sanity. To have a space to come where you are not locked up in your room, in the open air.”

“Well I love this neighborhood because I was born and raised here. The thing that is getting worse, is it’s getting really expensive.”

What I would like to see five years from now

“The only thing I’d change is the trains. More reliable trains!

But Bay Ridge is getting close to perfect for me in my eyes. It’s like a small town in the city. It’s a quiet, peaceful place, I feel safe here. You can go into Manhattan for work, or to the busy areas of Brooklyn, then just come here and relax and forget about the day and just enjoy your life here.”

Bay Ridge is getting close to perfect for me in my eyes.

“One of the places that has come to be important has been the gym [Bay Ridge New York Sports Club], because that has been my only connection to the outside world. We are in our rooms all day on our laptops, doing zoom meetings. That has been the only escape away from my room.

“I like this neighborhood because its kind of peaceful. It feels very safe, even if I come here late at night, it doesn’t feel scary.”

“I think that people here stay a bit to themselves. People do meet up at the garden and have festivals and all. But it would be good to see more of those community centers maybe, like you have in Manhattan.”

“Owls Head Park. It’s always a nice place to stop by and enjoy nature. It’s like an escape from your house.”

“I’d like to see more investment in small business. The local corner store where people get groceries. If you spend money at a Wal-Mart it’s going to wind up in the pocket of somebody that’s got way too much money already, has an offshore account. People don’t see the opportunity of investing in small business.

“With the pandemic, all these businesses and restaurants that provide so much of the culture of our neighborhood are just disappearing. Not going to be seen again for what twenty, twenty-five years?”

View the interactive map of NYC for other views!