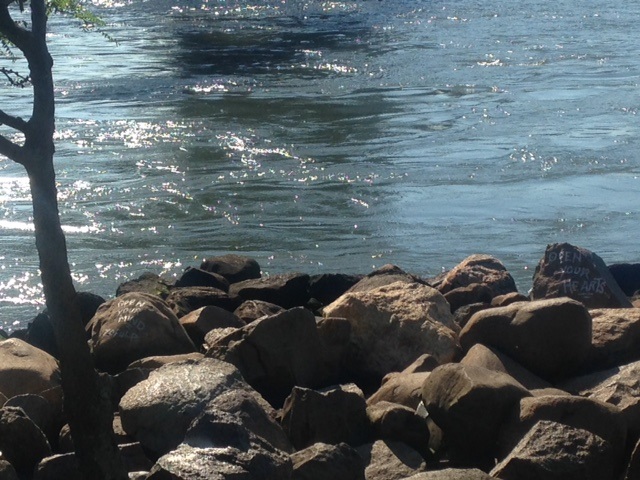 A place that means a lot to me: Astoria Park, and all the parks really, mean the world to our family. We visit a few local parks each week, and love to explore the entire neighborhood’s playgrounds and parks.

What concerns me: Not enough affordable housing, or family homes. And too many apartments and condos for single person/ transitional dwellers.

What I would like to see 5 years from now: More affordable housing. More families who stay! And more programs and spaces in support of the arts.

A place that means a lot to me: At the top of Astoria Park, there are some rocks jutting out into East River. Two of them have words painted on: one says “Open Your Hearts” and the other says “Open Your Mind”. I love the messages, and the fact that one is plural, one singular, and the timeless river (which isn’t really a river, but a tidal strait) flowing by.

What concerns me: Escalating rents for both housing and small businesses, which dramatically change the nature of the neighborhood and who can live and work here.

For example, in 2011 as part of the project “30th Ave – A Year in the Life of a Street”, my interviews along just one block included owners/managers of a party-store, a jewelry store, a billiards hall and a music store, who came from Mexico, Uzbekistan, Colombia and Greece. Now, the whole block has been redeveloped into a “mixed-use” building. All those stores have moved elsewhere or closed, and the new building stands empty.

What I would like to see 5 years from now: Thriving immigrant-owned small businesses, restaurants able to stay open, and greenery or solar panels on all of the neighborhood’s flat rooftops.

A place that means a lot to me: Sean’s Place: it’s a park in Astoria where my kids spend hours a week playing.

What concerns me: There are too many large, fairly luxury condos going up in what is still a mostly smaller scaled Queens neighborhood.

What I would like to see 5 years from now: More culture oriented businesses, like a theater that shows more independent and foreign films.

View the interactive map of NYC for other views! And share yours here.