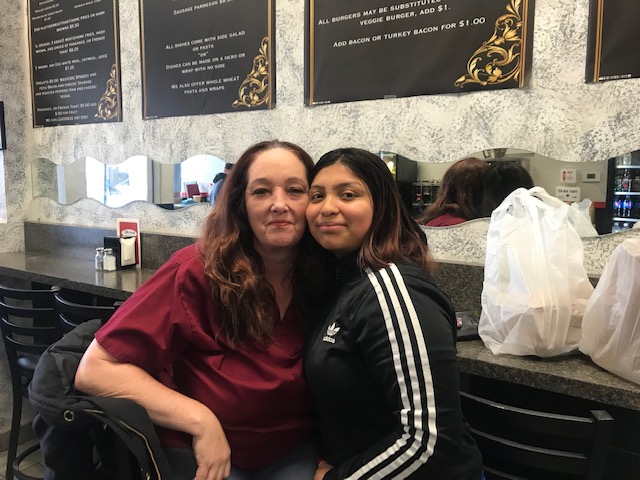 In Bella Giornata Luncheonette – known locally as Mike’s place – teacher Tracey and one of her students, Miriam, were getting their breakfast.

On places that mean a lot in the neighborhood, “can I do two?!” asked Tracey. “The theater is amazing…with the famous people that come here. And here, Mike’s place. This is the only place we eat, this is where we come for breakfast, lunch, whatever. The people are friendly, the place is absolutely clean, the food is outrageous.”

Tracey says that changes she’d like to see include making the nearby park safer for kids to play, and more places for children down by the waterfront – the center that used to be there was destroyed in hurricane Sandy.

Nearby, Kenya was buying food from a vendor who has been in the neighborhood for years. The theater – which was recently refurbished – was the first place that she mentioned as well, describing how she knew of a couple who had met each other there. The neighborhood’s growing, and she says there’s a need for more roads to accommodate the increasing traffic.

Joy Ghigliotti opened Hypno-Tronics Comics in 2013, with her late partner Ed Varuolo. The store’s first on her list of places in the neighborhood that mean a lot to her – “it’s the best store in the World!”

“And St George theater is awesome,” she adds, “it’s really cool that they refurbished it lovingly.”

Hypno-Tronics’ tagline is “giving tourists a reason to leave the Ferry Terminal since 2013”. Joy sees the city missing a real opportunity.

“You have a built in tourist attraction, the Staten Island ferry. Thousands of tourists take this every day just to get a view of the Statue of Liberty. How do you not have anything here? It boggles my mind. I’d change it so we actually have attractions and things down here.” Joy would have welcomed the wheel if it had come. The plan for a giant ferris wheel ended in October 2018 after six years of plans, due to legal issues and battles over funding.

View the interactive map of NYC for other views!